I kid you not; when I say, most people believe that fashion and feminism are two opposite sides of a pole. But take it from me, an ardent lover and follower of both; these two are actually very alike. Both work at liberating people and opening up minds. If not for progressive thinkers like Mary Phelps Jacob, we still be bounded within the corset. Just so you know, Mary created the first bra. Similarly, we owe it to Betty Friedan who very bravely burst the so called ‘ Feminine Mystique’. She discovered that women were not happy with just baking cakes, raising kids and being someone’s better half. Lets us not forget the contribution of our favourite French ladies: Coco Chanel and Simone de Beauvoir. For each in her own way offered women bold new choices. Coco took black out of eternal mourning and gave to the world of fashion a new colour. While, Simone enlightened us of the fact that women are so much more than just the ‘Second Sex’.


The point that I am trying to make is, fashion and feminism are actually not so different, if anything they play on the same team. For centuries women have used clothes as a symbol of rebellion and a mode of identity creation. Be it Marlene Dietrich serenading us in a top hat and tuxedo in 'Morocco' or Yves St. Laurent icon 'Le Smoking' and from Katherine Hepburn's scandalous trousers to Annie Hall's vest and ties, right down to the current androgyny trends dominating the runways, fashion has empowered women in its own way. Not only are women taking over, but they are doing it in some major style. 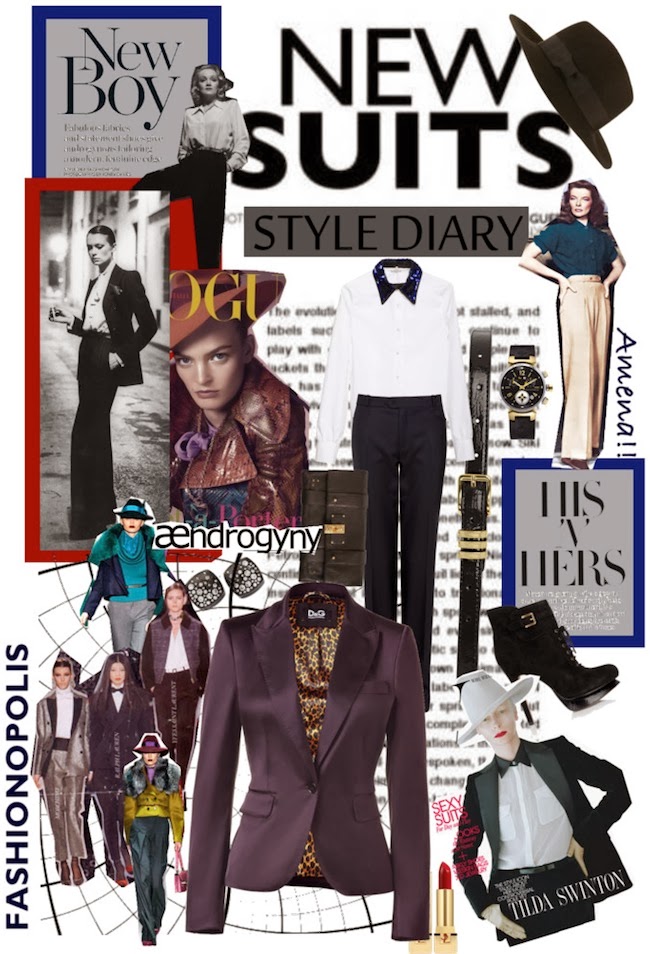 [More information on these pieces here.]


Well then, step aside boys; there is a new [Wo]Man in town. Say hello to the Female Dandy. She's all woman, but loves to dress like a man. And nothing, I mean nothing says sexy better than a woman in man’s clothes. So bring out the shirts, vest, jacket, frock coats, ties, bow-ties, brooches, scarves, hats, jodhpur ect...Ladies, we’ re suiting-up and making Barney Stinson a very happy boy.
Not only is this a very trendy and versatile look, but actually quite simple to create.

In five easy-breezy steps you too can rock the dapper-chic androgynous look.
1. Borrow a crisp white(or stripes/checks) Shirt from your father, brother or boyfriend.


2.Pair it with well fitted trousers. Slim fit or high-waist pants are often preferred for this look.


3.Polish this look off with stylish outerwear. Choose a sophisticated blazer, coat or a tuxedo jacket to create a dashing three piece ensemble.

5.Complete the look with some stylish accessories such as  hat, boyfriend watch, scarf, cuff-links ect....

This current androgyny trend brings to mind Gloria Steinem famous words: “Some of us are becoming the men we wanted to marry”, and from the looks of it; we are dressing the part too. Don't you agree girls?

What is your take on this trend? Are you loving it, not liking it or still not yet sure about it. Share your view with me in the comment section.