Rudyard Kipling once wrote, "Oh, East is East, and West is West, and never the twain shall meet".
With all due respect to Mr Kipling, the ‘twain’ have not only met, but they are pretty much intermingling as well. While the geographical borders may demarcate one country from another, culturally it is becoming difficult to draw distinct boundary lines. One great example is the English language it self. It is spoken in many countries round the world, but each country has added its own native flavour to it. While the American speak ‘Americanized’ English, we in India speak the ‘Indianized’ English. More or less, both are accepted forms of it.

This coming together and blending of different cultures is the birthplace of new creative concept. Better know as ‘fusion’, it simply means mixing and merging of two or more distinct ideologies/cultures and creating a new entity.
When it comes to fusion, no one does it quite like the fashion world. For years designers have been mixing and combining vintage themes with modern looks, eastern fabrics with western silhouettes’ and Asian motifs with African colour palette to create new looks season after season. 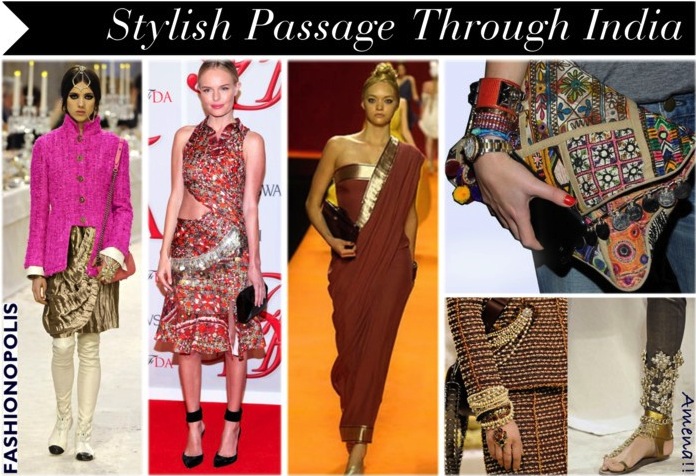 [Images via Google and Pinterest]
One of my all time favourite themes is Indian Fusion. From draped gowns inspired by the saree, to Chanel paying homage to the last days of Raj through its Paris-Bombay collection, Indian influence has been seen on countless occasion.
For those who don't know what a Indian Fusion look is, it is combining of one or more trademark Indian entity with that of another country/culture. For example if a kimono is made out of ‘Patola’ {Indian double Ikat} fabric the finished garment is Indo-Japanese fusion piece.
While designers have played around with mixing Indian styles with those of different countries and cultures, the most common as well as popular style is the Indo-Western fusion look.

Key Indian features used in Fusion looks:
1.Prints & Motifs: Indian clothes have always been vibrant and colourful, filled with intricate prints and eye-catching motifs. Indian block printing and ‘kalamkari’ are some of the famous fabric printing art forms.
Paisley -also know as ‘kari’ or ‘ambi’- which is shaped like a mango is popular motif seen on sarees and cotton print suits. Other famous Indian motifs are the various interpretation of the peacock feather, the lotus flower, the word ‘Om’ in Sanskrit and Indian deities such as Lord Ganesha.

2.Textile: India is rich in its textile heritage. From a variety of weaves to various tie & dye techniques, Indian textile is highly diverse in its offerings. ‘Kanjeevaram’, ‘Paithani’, ‘Patola’, ‘Ikat’, ‘Bandhani’ and ‘Chanderi’ just to name a few famous Indian weaves and tie & dye technique that have had an international impact. 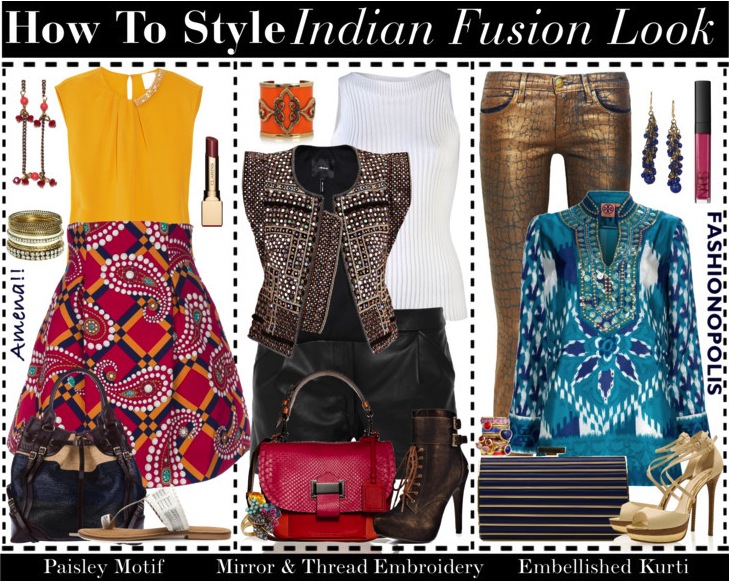 [More information on these products here]

3.Embriodery & Embellishment: Legacy of the Mughals, hand embroidery has been a part of Indian heritage as well Indian attire for years. And just like textiles, Indian embroidery too has made its mark world over. Traditional ‘Ari’ work, Parsi ‘Gara’ embroidery, ‘Kantha’ and ‘Phulkari’ stitch, ‘Chikankari’, ‘Banjara’ style embroidery featuring patchwork, mirrors, coins and shells and rich metallic ‘zardozi’ have been used by a number of international designers in their collections.

4. Silhouette: While saree is officially the most famous Indian drape; there are a number of other famous Indian silhouettes that have been seen on international runways. The Nerhu Jacket, the traditional Indian tunic called ‘Kurta’ {or ‘Kurti’}, the ‘Kali Ghagra’ {multi-panel skirt} and turbans have all been used in their original or remodelled form. 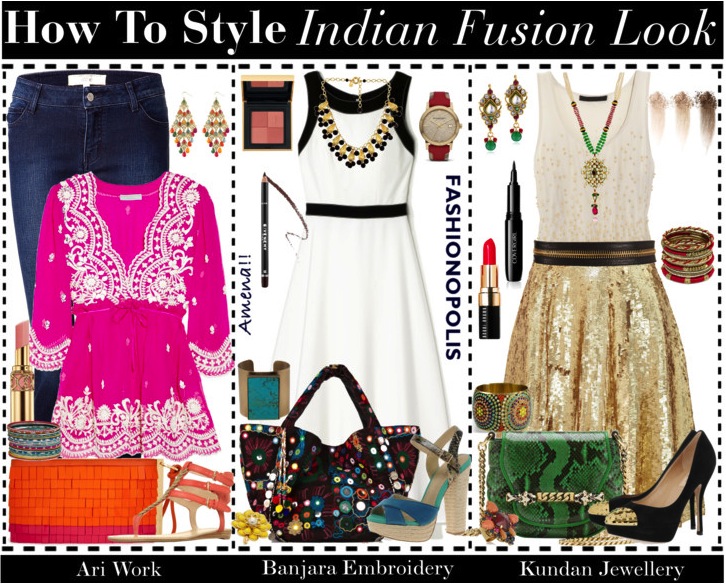 [More information on these products here]
5.Jewellery: Indians love their jewellery. Even before statement necklace or arm party became an international trend, we Indians have been bejewelling or necks, arms, ankles, fingers, ear, nose, forearms and forehead for years.The Mughals and Maharaja style ‘Kundan & Meenakari’ and Nizam style Hyderabadi ruby and emerald sets are some of the finest trademarks of Indian jewellery.

From Maurya to Mughal, Kuchipudi to Kalari and Tagore to Tharoor, Indian heritage, history, arts and aesthetics have had a strong impact and influence world over.