As much as I love fashion, I always wanted to write about other things that interest me too. While a lot of fashion bloggers write about food, fitness and home decor, non of those topic interest me, mine is more of a, lets say -for lack of better words- human interest piece.
Here is my first non fashion post, do let me know what you think of it.

I live in a country where it is almost socially incorrect to be single after a certain age. Now days the beloved aunties tell me that I should plan my baby on my wedding night itself! Who cares if you are prepared or not for motherhood, those ovaries of yours are not getting any younger!
F.Y.I: For that baby to happen, I need the other half. Most people {including a few friends} think I am being overtly picky and choosy in that department. Which I am! Hello, this is my life partner we are talking about, most people are picky while selecting a laptop, so I can jolly well be about something a tad bit more important!
Someone wisely said, "You have to kiss a lot of frogs before you find your handsome prince."  Whether you like it or not, being introduced, fixed or set-up with Mr. Oh So Wrong is every girl's rite of passage. 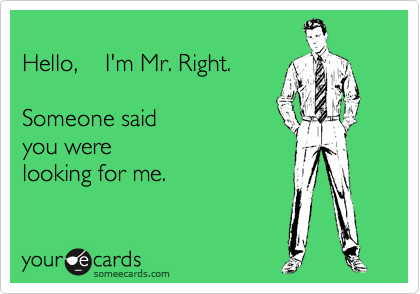 [Image via Pinterest]
Disclaimer* "Similarity to any person living or dead is highly likely as it is based on first hand experiences. This is not a depiction of all men, only the really really bad ones have been mentioned. The true purpose of this piece is enlightenment, mockery is just an added benefit "

You Are So Vain………..You probably think everything is about 'You'!
He walks in like he is some Rockstar or something, and from the get-go throws his attitude around. When he does talk to me- while taking a break from his self admiration - all that comes out of his mouth is “I. Me. Myself.”…blah blah blah! This is just the first ten minutes of the meeting. No wedding bells for us, thank God! It seems he’s already in a relationship- with his freakin Ego! The two of them can live happily ever after {for all anyone cares}. Goodbye Mr. Narcissism, you give a complete new meaning to the phrase 'love thy self!'.

Mama’s Boy
Ok! she is the centre of your universe, your number one gal, she  finds no faults in you and she thinks no one is worthy of you, and you very lovingly call her “Mama”.
Meet our arc, sworn, unspoken antagonist- His Mother! She is resting on a pedestal; the one you cannot touch and not-so-wise ones spend their entire life trying to reach it{As if they could ever overthrow the Queen.} The quintessential mama’s boys are basically little boys trapped in a man’s body, who are like a tennis ball bouncing between you and mommy dearest. Make no mistake, the scorecard in this relationship is forever going to be in favour of the other player. There is no winning this match, maybe a false feeling of victory once in a while. Not only one game, but the entire tournament is eventually won by an opponent who refuses to retire.

She's The Man!You know who is going to wear the panties in this relationship and it sure as hell not you! Yes he’s one of 'those' types, the type that look good only from afar. On a closer inspection you don’t like what you see. He is the kind of man- well man is a strong word, wimp is a better adjective to describe this creature- who wont stand up for you, no way! You will have to fend for yourself, and sometimes even for him. Not to be confused with with the sensitive boys-do-cry type, basically, this one is a coward. He will cling to you like wrinkled cotton, and there is not much you can do about it. He traps you with a facade of sensitivity and initially you too like his needy side, even indulge it a little, but after the honeymoon period is over  all this gets a little too overwhelming. Eventually you give in and don the pair of only pants available at home.

The Ex-Factor
“You look like some one I know”…. Sounds like a familiar tag line. Well, most of us have heard it at one time or another. You just don’t want to hear it when your maybe future husband uses it on you. Especially while alluding to his ex- girlfriend.
New Flash: There is a third wheel in this relationship and don’t be surprised it could very well be you. These types are busy living their own ex fantasy and you’re just a freeloading passenger. Three’s Company could soon be the story of your life. And as this twisted ménage à trois plays out, you could probably end up as the spectator- 'the other woman'-while your man tangos with his ex. He is so caught-up in the tunes of his past, unless you don’t decide to change the track his record is going to be played on the loop.

You are the Boss of me…Not!
Guess who is going to control the remote in this household, and ain't you, honey! Well, this is just the good part. Say hello to the modern age Neanderthal man. He may look modern and act modern, but really he is a pre- historic man at heart. A 'Me Tarzan, You Jane' type. He likes things a little too much his way. This works in the romance novels {perhaps role play, also}, but having a dashing, overbearing broods in real life just stinks. There is a time to dominate and there is a time to let go of the reigns, unfortunately these kind of men are unaware of this concept. Domination is a habit and 'Control' is his middle name. He will keep tabs - on everything you do. It’s a dictatorial regime and all you can say is “Hail Master”.
Finding the Right One may happens in an instant for a few, while others may takes a long time. Between The Losers, The Players, The Misers, The Whiner and the ones with sexuality crisis you finally stumble upon what you're looking for. Some see it as an excruciating long journey while others have a a good laugh about it, but the overall experience is a part and parcel of life.